I remember, as a child, being forced to recite the ‘Lord’s Prayer’ at school assembly every morning. Thankfully, I no longer have to mindlessly perform that ritual but I do however remember a small section – “Give us this day, our daily bread”.

For over fifty years that daily bread was a part of my life, but the bread most people consumed back then and even more so now could not be described as bread. We have been eating bread for thousands of years, even though thousands of years in human history is a few minutes in comparison but traditional bread was very different to the bland, spongy, factory sliced imitation we see today.

The flour in bread used to be made by grinding grains between giant stones. This traditional flour contained the whole grain including the bran and the germ. Very nutritious but it was a dense brick compared to today’s ‘bread’. So what did we do to make it more palatable? We removed the bran and the germ leaving mostly starch.

With roller milling, this process was able to separate the bran and germ leaving behind the starchy flour. But the bran and germ were not wasted, they were fed to the cattle. The remaining carbohydrate dense flour breaks down into glucose in the body.

This move towards processed grains took a toll on health with such diseases as Beriberi and Pellagra becoming rampant, but the link with these deficiency diseases to the vitamin and mineral deplete bread remained unknown until the 20th Century.

When the food manufacturers became aware of these missing nutrients they began adding them back into the bread but the carbohydrates still remain in abundance. 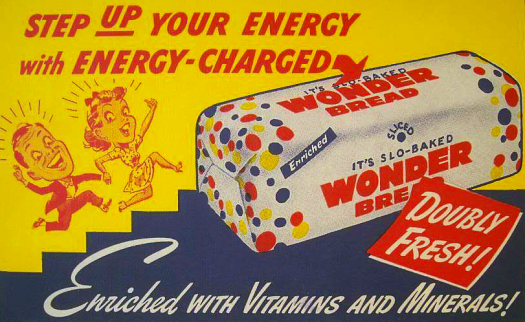 With the birth of agriculture and the mass cultivation of grains began to dominate our diet resulting in the massively reduced consumption of other foods rich in omega 3 fatty acids such as green leafy vegetables, meat and fish which are a much more available source of these omega 3’s and which can’t be made by the human body, are essential for brain, heart and immune function.

But most of the processed food we consume now is high in omega 6’s such as Soybean Oil and Corn Oil due to their much longer shelf life. Great for the food industry, but not so good for us, according to current research. So the ratio of omega 3 to 6 in our food supply is out of balance.

Add to this the grain crops used today that have been sprayed numerous times with dubious chemicals and it’s no wonder that our “Daily Bread” is no longer part of a low carb or paleo diet.

This ABC Catalyst documentary gives a detailed insight into the effects of gluten in the diet, the changes in the panification process in bread making and how gluten can affect the microbiome.

2 Replies to “Our Daily Bread”