Meat or other ingredients wrapped in pastry can be traced back to Classical Greek and Roman cuisine but sausage rolls seem to have evolved with the Hungarian croissant of the late 17th century and at the start of the 19th century in France with early versions of the classic pork roll proving popular in London during the Napoleonic Wars.

Whatever the roots, the great British sausage roll remains popular to this day and in the UK, the bakery chain Greggs sells around 2.5 million sausage rolls per week. Not wishing to advocate anything that Greggs sells, nobody can deny that a sausage roll is satisfying both hot or cold, especially on a warm Summer day with a salad, pickle, picnic or a pint…did I just use the P word? Okay, maybe a class of wine at a push.

So not wanting to miss out on this culinary classic, I decided to give it the low carb treatment…and they have proven to be quite popular with friends and family who aren’t even eating low carb. So if you find yourself invited to a garden party or picnic this Summer, these low carb versions will be devoured by the most ardent sausage roll aficionado and they are really easy!

I used the classic Fathead Pizza dough recipe adding some grated parmesan cheese and black pepper while I cook six roughly 15cm long sausages in the oven for 30 minutes at 220 °C. If you are using pre-made sausages it is better to remove the skins first.

When the Fathead dough is cooled, roll it out between two layers of cling film to about 3 millimetres thickness and when the sausages are cooled to room temperature, roll each one in the dough like a blanket cutting off any excess. Lay them on parchment paper and sprinkle with more grated parmesan, sea salt and onion powder. Place on a baking tray and cook in the oven at 200°C for 30 minutes or until golden brown. 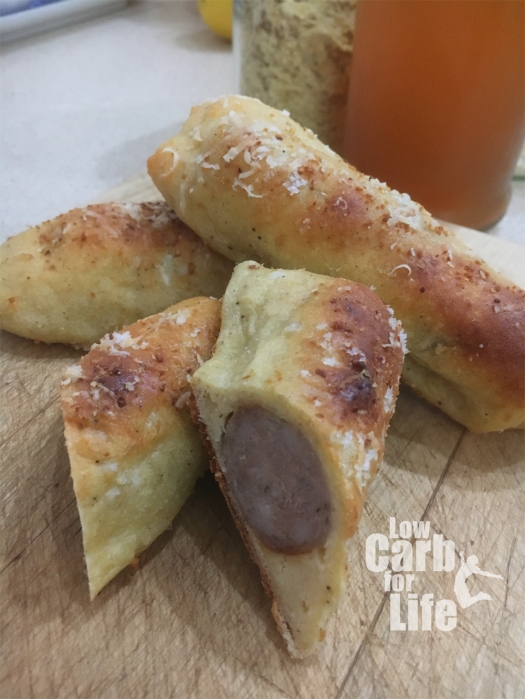 One Reply to “Fathead Sausage Rolls”