It’s rare these days that I get an urge for a past treat but it was a rainy Sunday afternoon and I decided to pass the time by raiding my cupboard and getting creative in the kitchen.  Discovering a bar of dark chocolate I had received at Christmas and some desiccated coconut I attempted to recreate a past pleasure, the  Bounty.

I remembered they introduced a dark chocolate version which for me came second best to the milk chocolate original but as my tastes have changed considerably since eating low carb I thought why not give it a try….

…They turned out great! and only 4.2 carbs per bar. Admittedly they are slightly smaller than the original but for a treat made with totally healthy ingredients; they certainly went well with a cup of coffee. 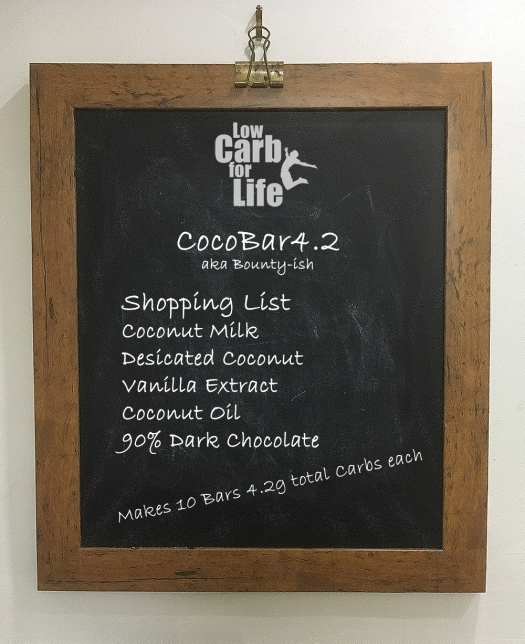 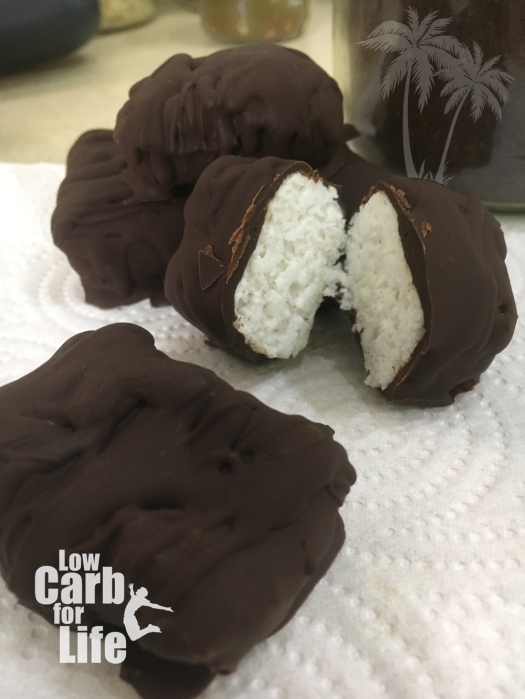 I used half a can 200g of coconut milk (the half at the top where the pulp rises above the water, so don’t shake the can before opening) heated gently in a saucepan to which I added 100g of desiccated coconut, a quarter teaspoon of vanilla extract and two tablespoons of coconut oil for five minutes until the desiccated coconut had softened and taken on the milk and oil. I then spooned the mixture into a bowl and cooled in the fridge for 90 minutes. Once the filling mix had cooled and firmed I divided the mix into ten pieces approximately 4cm x 3cm x 2cm and placed them on a sheet of parchment paper in the freezer for 30 minutes.

I used one bar of 90% dark chocolate (100g) and two tablespoons of coconut oil melted in a bowl over a saucepan of hot water. I then gently rolled each piece of the filling in the chocolate and placed them on another sheet of parchment. I drizzled the remaining chocolate over the top of the bars for the familiar rippled look. These were then placed in the freezer for a further 30 minutes.

I have frozen these bars and take one out of the freezer occasionally and they only take a short time to soften while my coffee is brewing.