For over forty years doctors have told us that consuming salt increases blood pressure, but according to Dr James DiNicolantonio in his book The Salt Fix there was never any sound scientific evidence to support this idea. 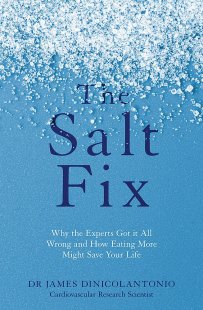 Dr DiNicolantonio says that the World Health Organisation and the UK and US advisory bodies on diet have got it wrong with their advice to cut down on salt. Dr DiNicolantonio, who is an associate editor of the journal BMJ Open Heart and a cardiovascular research scientist at Saint Luke’s Mid America Heart Institute, says the evidence against salt does not stack up.
A hefty 258 pages (49 of which are clinical references), The Salt Fix looks at decades of research and illustrates ways in which salt could actually be a solution to many widespread conditions.
He goes on to say that evidence in the medical literature suggests that approximately 80% of people with normal blood pressure (lower than 120/80) are not sensitive to the blood-pressure-raising effect of salt at all. Among those with pre-hypertension (a precursor to high blood pressure), roughly 75% are not sensitive to salt and even among those with full-blown hypertension, about 55% are totally immune to salt’s effects on blood pressure. “We are essentially salty people” he states, “We cry salt, we sweat salt and the cells in our bodies are bathed in salty fluids. When we restrict our salt intake, our heart rate goes up, reducing our blood and oxygen circulation throughout our body and increasing the heart’s need for oxygen. Without salt we would not be able to live, just as the vilification of salt will take decades to reverse, the halo effect of unethical sugar research took (and will continue to take) years to reveal as well.”

One Reply to “Salt – A Crucial Electrolyte”